Florence is out there.... 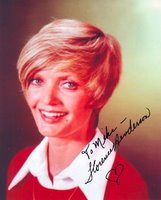 From the Associated Press: Tropical Storm Florence formed far out in the open Atlantic on Tuesday, and forecasters said it will probably become a hurricane.

But they said it was too soon to tell whether the sixth named storm of the hurricane season would reach the United States.

Florence had sustained wind near 45 mph, 6 mph over the threshold for a tropical storm. The minimum for a hurricane is 74 mph.

At 5 p.m. EDT, the storm was centered 960 miles east of the Lesser Antilles, or about 2,100 miles southeast of Miami, and was moving northwest at about 12 mph.

The storm follows on the heels of Tropical Storm Ernesto, which was briefly the season's first hurricane before weakening and hitting Florida and North Carolina last week as a tropical storm. It formed over the southern Caribbean on Aug. 25.

At least nine deaths in the United States were blamed on Ernesto, which also killed two people in Haiti, delayed the launch of the space shuttle Atlantis and blacked out thousands of homes and businesses from North Carolina to New York state.

Last year's Atlantic storm season had a record 28 named storms and 15 hurricanes, including Katrina.
at 9:29 PM