Hurricane season for the Atlantic basin begins June 1. On average one tropical storm forms every other year during that first month. This year, 2011, was one of those years. Tropical Storm Arlene formed June 29 and made landfall along the coast of Mexico June 30.

Three named storms formed in July – well above the long-term average of one.

Tropical Storm Bret formed July 17 off the eastern coast of Florida. The storm never came close to land, tracking north and east before disintegrating over the Atlantic Ocean July 22.

Tropical Storm Cindy from July 20 well offshore in the eastern Atlantic and was never a threat to land. It became a post-tropical storm on July 23.

Tropical Storm Don formed July 27 about 190 miles north of Cozumel Mexico. It fell apart as it came ashore the coast of Texas near Baffin Bay July 29.

August was the busiest month with a tropical depression and seven named storms, including Irene, which became the season’s first hurricane and first major hurricane.

Emily formed Aug. 1 about 50 miles west-southwest of Dominica. The storm degenerated into a tropical low Aug. 4.

Tropical Storm Franklin formed about 460 miles north-northeast of Bermuda early in the morning of Aug. 13. By end of day, the NHC announced it had lost its tropical characteristics. It was never a threat to land, remaining over the northern Atlantic Ocean.

Hurricane Irene formed Aug. 20 east of the Leeward Islands about 190 miles east of Dominica. Irene was the ninth named storm of the season and the first hurricane and major hurricane. It is the first to hit the United States since 2008.

Irene made landfall twice along the U.S. East Coast - first in North Carolina on Aug. 27 and again the next day in New Jersey. Irene is blamed for as many as 55 deaths and billions of dollars in damage.

Tropical Storm Jose formed Aug. 28 in the eastern Atlantic while Irene was making its way along the Atlantic Seaboard. Jose skirted to the west of Bermuda before heading off into the open waters.

Katia formed Aug. 29 about 535 miles west-southwest of the southernmost Cape Verde Islands. The NHC tracked its path until Sept. 10 when it went post-tropical about 295 miles east-southeast of Cape Race Newfoundland. Katia was the second hurricane and second major hurricane of the season. It followed a similar path to Irene, only remaining offshore, traveling through the Atlantic between the U.S. East Coast and Bermuda.

Tropical Storm Lee formed Sept. 2 south of Louisiana and made landfall over south-central Louisiana Sept. 4. Lee created problems for residents of Louisiana, Mississippi, Alabama and the Florida Panhandle over the Labor Day weekend before moving on to bring rain and winds to residents still cleaning up from Hurricane Irene. The red flags waved on Pinellas County beaches due to rip current dangers as Lee kicked up large waves in the Gulf of Mexico. Lee was the first tropical storm to made landfall in Louisiana since Hurricane Gustav in 2008.

Maria began as Tropical Depression 14 the afternoon of Sept. 6 and became a tropical storm on Sept. 7. It was located about 1,220 miles west of the Cape Verde Islands. Maria followed a similar path to Hurricane Katia, moving offshore the U.S. East Coast and Bermuda. It became a hurricane on Sept. 15 and was a post-tropical cyclone by Sept. 16.

Nate, the 14th named storm, formed Sept. 7 in the Bay Campeche. Nate made landfall Sept. 11 along the coast of Mexico just north of Barra de Nautla.

The last five names on the 2011 list are Rina, Sean, Tammy, Vince and Whitney

Hurricane season ends officially on Nov. 30.
at 9:30 PM No comments: Links to this post

I don't think it's possible, but both Katia and Lee are headed towards the a relatively imilar spot in the Northeast

Katia is predicted to turn to the North and perhaps Northeast and Lee is moving like a slug so this probably won't happen, but the current long range map makes for interesting speculation.

This caught my eye this morning.  Makes a lot of sense.  The Twitter traffic from Irene shows the trend.


ORLANDO, Fla. -- Hurricane Irene steered clear of Central Florida for the most part, sparing the region of not just damages but communication troubles, as well, but experts warn that families need a plan.
More than 60 percent of all phone calls are made on a cellphone, and when an earthquake shook the East Coast last week and Hurricane Irene roared ashore over the weekend, many people couldn't get through to family and friends because the networks were jammed.
To avoid these problems in the future should a natural disaster hit Central Florida, FEMA suggests emailing or texting first. While a call might not go through, a text message should.
When Hurricanes Charley, Frances and Jeanne whirled through Central Florida in 2004, sheriff's deputies and fire fighters also had problems with cellphones.
Volusia County's community information director, Dave Byron, said that it really is a problem when cellphones don't work during hurricanes .
"When you get a disaster and you're a first responder like I am and you don't have a main communication tool, that does put you at somewhat of a disadvantage," Byron said. "I do think that is a subject that those that have some control over this ought to take a look at."
Not only do networks jam, but the wind and weather affects the equipment on the towers, so should a hurricane hit Central Florida, plan ahead:

FEMA has a new mobile app for Android (iPhone coming soon) and a text messaging program.  Here are the details.
at 6:23 AM No comments: Links to this post

Katia will get the attention, but I'm watching the Caribbean and Gulf

While important to keep an eye in both directions, there are the makings of a storm system to the South of Florida in the Northwest Caribbean worthy of watching.  See the Accuweather forecast box on the right rail of this blog.
at 7:29 AM No comments: Links to this post 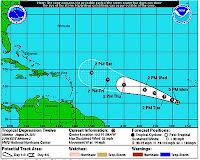 TD 12 is out there in the Atlantic and the Gulf of Mexico is waking up.


Read all about it from Accuweather.
at 7:54 PM No comments: Links to this post

How many tweets did Irene generate? 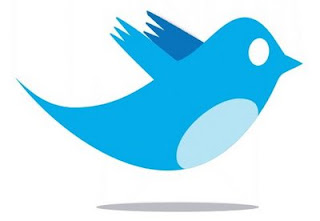 More than a million Twitter messages were posted about Irene. Hurricane Ike, by contrast, will be remembered in only about 10,000 Tweets.
at 6:57 PM No comments: Links to this post

Coming to Florida to Escape a Hurricane.  Who would have thought?
at 11:09 AM No comments: Links to this post

Best of luck to everyone along the East Coast!   We're praying that Irene provides as Good a Night (and day) as possible!
at 7:56 AM No comments: Links to this post

From the Miami Herald

Only three hurricanes have struck Florida in July since 1900, but.....

The three incidents include Dennis, a Category 3 when it struck near Pensacola in 2005, a Category 2 system that hit near Cocoa Beach in 1926 and a Category 1 storm that struck Central Florida in 1933.

From the Palm Beach Post and the Weather Underground:

The low pressure system north of Puerto Rico was still holding together Friday, but the National Hurricane Center cut its chances of tropical development. (Credit: NOAA)

It’s unusual for the National Hurricane Center to start tracking a tropical system this early in the year - hurricane season doesn’t officially begin until June 1.

But there’s no need to hit the panic button, a hurricane expert says. Early disturbances in that part of the Atlantic basin do not portend a busy season.

The NHC began discussing the system, designated 91L, on Thursday. It was still on their radar Friday morning, although forecasters had reduced the chances that the disturbance would grow into Tropical Storm Arlene, the first of the 2011 season.
Satellite images showed the swirl of clouds and storms was still holding together, though.

“It’s interesting that it’s done as well as it has, because there’s really high wind shear,” meteorologist Jeff Masters, co-founder of online weather portal Weather Underground, said in an interview Thursday. “We’re talking 70 or 80 knots when 20 is often enough to tear something apart.

“It is early to be having a tropical disturbance like this because you don’t often see that in April. But it’s definitely not a harbinger of an active season. Sings of an early season are systems that are coming off the coast of Africa, or in the Caribbean.
“You start to get a lot of early activity down there and that’s when you worry. But early activity between the Bahamas and Bermuda doesn’t really matter that much.”

On Friday, 91L was plotted at 25.3N 63W, or 496 miles south-southeast of Bermuda and 1,064 miles due east of Palm Beach. It had winds of 40 mph but had not developed into a true tropical system. It was moving to the north at about 10 mph.
But some computer models show the system - or at least moisture associated with the low - nearing the Florida coast early next week.
at 7:42 AM No comments: Links to this post