Also, ironically, Bruce Springsteen wrote and recorded a song in 1973 called "4th of July, Asbury Park (Sandy)"  The Hollies released in 1975 on their "Another Night" album.

If you found this blog via a search, here's a link to the National Hurricane Center for information on Hurricane Sandy.

Otherwise, here are my thoughts.  First, it's quite unbelievable that we are pretty much sitting out Hurricane Sandy here in Florida.  Second, I think I jinxed the situation with my post on October 15th.

Third, I did have the opportunity to experience Sandy last week during a vacation cruise my wife and I had planned.  Just before we left Miami on Sunday October 21st, we did learn that there was a "disturbance" in the general area that our ship was headed. On Monday, October 22nd we were in the Bahamas at NCL's island, Great Stirrup Cay, and while we stayed on board, we could see the weather pick up throughout the day.

Here's a picture of the tender leaving the shelter of the Cay and headed into the open water back towards the ship: 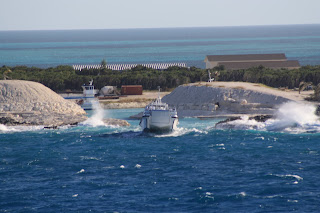 That night the Captain announced we would be skipping our scheduled stop in Ocho Rios, Jamaica on Wednesday October 24th because of a "weather system".  At that point, the limited satellite television channels we had available on board had no coverage.  Later we learned that a tropical depression had formed Tuesday morning and then quickly a named storm "Sandy"  had formed by that evening.

Sandy made landfall in Jamaica on Wednesday, the day we were scheduled to be there: 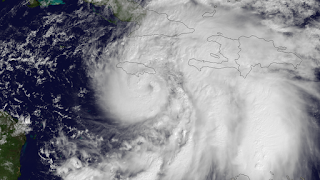 This was the first direct hit by the eye of hurricane on Jamaica since 1988 when Hurricane Gilbert came ashore.

Our ship had moved at near 20 knots per hour to the west headed for our new port of call, Cozumel.  We went from the Bahamas north of Cuba and into the Gulf of Mexico thus bypassing the quickly moving storm to the south.

While in were hundreds of miles from Sandy on Wednesday, Cozumel was very breezy.   Our next port was scheduled to be in the Cayman Islands on Thursday.   Tuesday we were informed that we would skip that stop and head south of Cozumel to Costa Maya, which is in between Cozumel and Belieze.

Friday's trip back to Miami from Coasta Maya wasn't bad until we got within a few hundred nautical miles of the US and then the ocean picked up.  It was a rough night.  Here's a picture of the TV in the cabin's sea conditions screen: 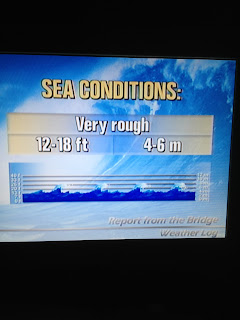 There was a bunch of wave crashing and from the camera pointing to the front of the ship, there were some waves that sprayed across the lower deck, but at no point did I feel there ever any danger.  Safe in bed was the best place to be and when we arrived into the Cruise Ship channel in Miami on Saturday morning, all was calm.   We had missed the brunt of the sideswipe Miami felt on Thursday/Friday.

We wish the Northeast the very best to withstand the impact of Hurricane Sandy Monday/Tuesday.  The 15-20 miles per hour winds we have here in Tampa Bay are nothing but a testament to the power and size of the storm.

Email ThisBlogThis!Share to TwitterShare to FacebookShare to Pinterest
Labels: Sandy

No News is Good News

I realized I haven't posted in over a month, which for the subject of this blog, is a good thing!

This time of year we watch the Gulf of Mexico, which history shows is where many late season storms originate.

Here's an excellent on-going recap of the 2012 season.