For the first time since I started this blog 12 years ago, I've been too busy dealing with the hurricane to blog about it.

That said, here in the Tampa Bay Area, we were fortunate, make that, VERY fortunate to, for the most part, just suffer minor damage, mostly trees, fences and pool screens.  The biggest issue most of us faced was power outages, which some are still waiting to be restored.

As for us, power was back on at Noon Tuesday.  We spent the better part of 3 1/2 days of oak tree branches, leaves and debris clean up. 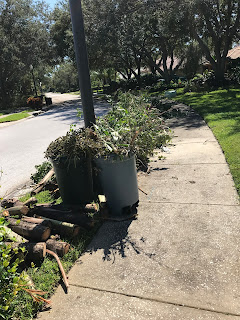 We spent Sunday night watching Irma coverage on TV until a transformer finally blew and the power went out.  My wife, son and daughter-in-law spent the night trying to sleep in an interior room of about 50 square feet.  It wasn't so bad because the wind wasn't as bad as expected and the interior temperature wasn't bad.

We awoke to the before mentioned tree damage.  Interesting to watch our neighbors slowly emerge to also assess the situation, on their property.  Besides the power outage, we also lost our AT&T connectivity.  We were without the entire day.   Our daughter-in-law's work phone is Verizon so she was able to post our status on Facebook and we had a phone to call a few family members to let them know we were okay.

Despite living in Florida for most of the past 30 years and blogging on this topic for over 1/3 of that time, this was the first hurricane that we really went through.

Finally, a few of my favorite Irma Internet memes: 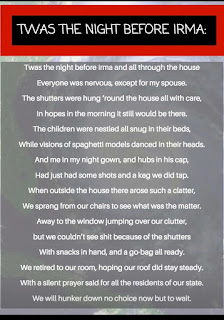 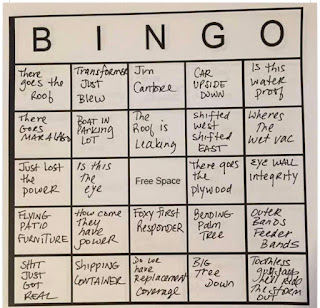 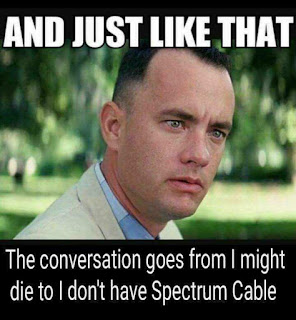 The forecasted track has continued to shift west over the past several days as the weather ridge that has been steering the storm and keeping it from turning North, has not weakened as originally expected.

This morning we find the path coming up the west coast of Florida and towards the Tampa Bay area.

Sunday Night into Monday is when the damaging winds are predicted for our area.

We can only hope that the ridge remains strong and the turn is even farther west.  That would keep the strongest winds offshore, but we'll be on the strongest side of Irma.

In any case, it's not good.  We'll be monitoring the system for the next 48 hours as meterologists expect the exact path to shift slightly which will determine who in the Bay Area gets the worst of "Irmageddon"

Our grand-dogger is doing her part.....

Grocery store managers began rationing awaiting replenishment which is on its way from their warehouses.

This morning, Wednesday, (9/6/17), my corner Winn-Dixie was still without.  Publix across the street was limiting shoppers to one 24-pack of Aquafina, at full (but not over) price, $4.99.   A very active scene at 7am. 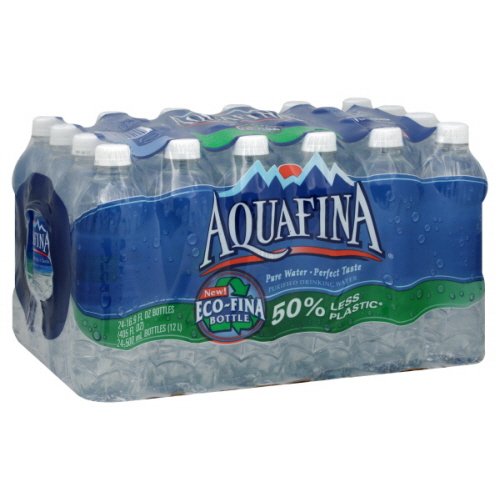 I expect there to be enough water available as we head into the weekend and hoarders are satisfied and the rest of us can get the suggested 1 gallon per day per person for at least 3 days.

Meanwhile the cone still includes the west coast of Florida but the models are slowly shifting east. Fingers crossed it pushes far enough east to miss us and all along the east coast of Florida and the Carolinas!
at 7:48 AM No comments:

After watching the terrible devastation in and around Houston over the past couple of weeks, all Floridians necks' twisted sharply 180 degrees to see what is now Hurricane Irma begin it's trek across the Atlantic.  While Houston overshadowed the pending approach to the US East Coast, we've been watching and hoping for the familiar "turn to the north" and spin "out into the North Atlantic".

Over the weekend the Tampa media really began it's balanced approach of "be prepared" but do not panic".   There are too many variables this far out. 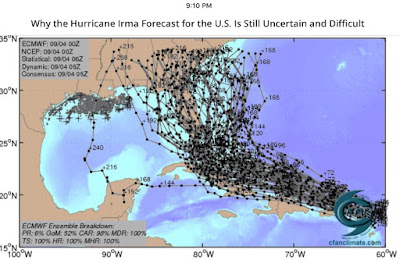 When the governor declared a preemptive "State of Emergency" yesterday (Labor Day), it was the signal to begin to deplete the shelves of hurricane supplies, especially bottled water.  I plan to head out today to get ours.   Most of the other items on the emergency supply list are in house here already, primarily just through normal purchases over the past couple of years.

The State of Emergency is also designed to help prevent price gouging.  Always an issue after the storm but sometime before.

There is a general sense of "uneasiness" in the state as the unknown of where the storm will potentially make landfall remains a constant.  Plus with the variables, no one knows for sure how they may be impacted other than to know that next Sunday and Monday are likely to be the "weather days".   As a Category 5 storm, there will be impact, but who and where remains to be seen!

Twenty-five years ago today, meteorologists officially named the storm that was brewing off the coast of Africa. The weather system, just a tropical storm at the time, would later grow into Hurricane Andrew and slam into South Florida as a Category 5, becoming the most destructive hurricane ever at that time.

From the Patch.  Very professional story: 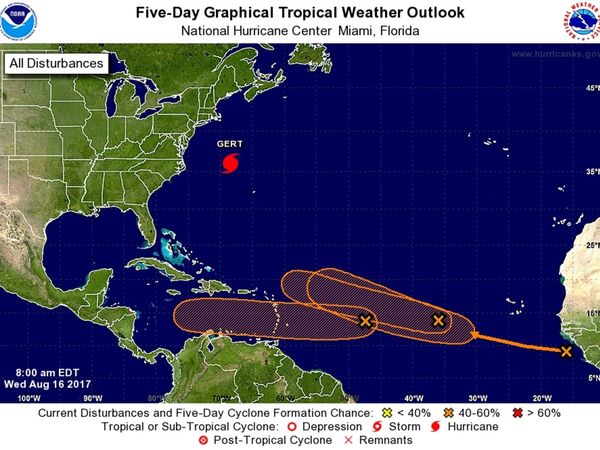 TAMPA, FL — Forecasters at the National Hurricane Center were busy Wednesday morning monitoring four separate storm systems in the Atlantic Ocean. While Hurricane Gert is making the most waves, three areas of disturbed weather are showing stronger signs for the potential to develop into the Atlantic hurricane season’s next named storms.
Hurricane Gert was located about 330 miles northwest of Bermuda as of the center’s Wednesday morning update. The Category 1 storm was packing maximum sustained winds of 90 mph while moving northeast at 21 mph. Gert is following a projected path that will take her into the open Atlantic over the next few days before encounters with cooler waters are expected to cause her to downgrade back to tropical storm status.
Get the Patch newsletter and alerts in your inbox.
The three disturbances under watch were all located in the southern Atlantic Ocean as of Wednesday morning. The first system is an area of low pressure that was located about 900 miles east of the Lesser Antilles as of the hurricane center’s 8 a.m. Aug. 16 Tropical Weather Outlook report. The storm was moving westward at an estimated 15 mph. It’s expected to cross into the Caribbean Sea by Friday. “Upper-level winds are forecast to become a little more conducive for development during the next several days,” the center warned Wednesday morning. The system has been given a 30 percent chance of developing more over the next 48 hours. Chances rise to 40 percent over the next five days.
The second disturbance under watch was located a few hundred miles west of the Cabo Verde Islands Wednesday morning. Forecasters expect the low pressure system to move west-northwest at 15 to 20 mph over the next few days. Gradual development is possible as the workweek continues, but forecasters say the storm may encounter less conducive conditions over the weekend. As of Wednesday, the system had been given a 30 percent chance of developing more over the next 48 hours. Those chances rise to 40 percent over the next five days.
See also: ‘Extremely Active’ Hurricane Season Possible: NOAA’s Adjusted Forecast
A tropical wave near the coast of Africa is also under watch. The center says conditions do appear conducive for the system’s gradual development as it moves westward at an estimated 15 mph over the next few days. That storm has been given no chance of forming more over the next 48 hours. The chances, however, rise to 40 percent over the next five days.
Should the systems develop enough to earn names, the next three up are Harvey, Irma and Jose.

Confederate Statues Coming Down • CEOs Abandon Trump • Passersby Ignore Sexual Assault: Patch Morning Briefing
Also: a Miss America thief, a nail through the heart, your keys to Elvis' home and more.
While it’s still too early to tell what, if any, impacts the disturbances may have on Florida or the eastern seaboard, the uptick in activity serves as a reminder that the peak of the season has arrived. This year’s peak, forecasters at the National Oceanic and Atmospheric Administration say, could be a busy one. The agency adjusted its seasonal forecast upward last week.
Back in May, NOAA forecast a 45 percent chance of an above-normal season. Last week, that number rose to a 60 percent chance.
Here Are The Top 10 Items You Need In Your Hurricane Emergency Kit
Forecasters call the period between mid-August and mid-October the “season within the season.” This eight-week period “is often the most active and dangerous time for tropical cyclone activity,” according to NOAA.
The peak period is historically responsible for major spikes in tropical weather activity, NOAA said. In fact, it accounts for roughly 78 percent of all tropical storm days on record. It is also the period when 87 percent of the category 1 and 2 hurricane days on record occurred. In addition, this period is responsible for “a whopping 96 percent of the major (category 3, 4 and 5) hurricane days.”


The Atlantic hurricane season runs from June 1 to Nov. 30 each year. Average seasons produce about 12 named storms, of which six become hurricanes. Three of the hurricanes are generally deemed major.
at 9:17 AM No comments:

When I went to bed last night, the "Invest" in the Gulf had a 20% chance of forming.   This morning I was awoken by Topical Storm Warnings on my phone.  This appears to be a "Low-End" Tropical Storm that will dump another 2 inches or so where we live and up to 4 inches south of Tampa Bay.

Some power outages including 1200 customers near (not so) Sun City.

There are some gusts and tornado watches/warnings for the Sarasota/Bradenton area to our south. Wind is strong on the Sunshine Skyway Bridge between St. Petersburg and that area over the mouth of Tampa Bay and traffic is stopped due to the gusts: 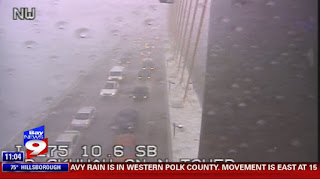 From the radar, it appears that south central Florida will get the brunt of this rain event. 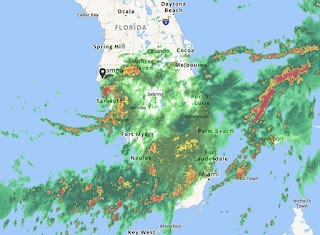 The Don is Dead!

Don Forms - History says it will stay south of Florida

That said, we are heading towards the peak of the season in August & September and will stay tuned!

Here's the path storms that form where Don has have taken in the past.... 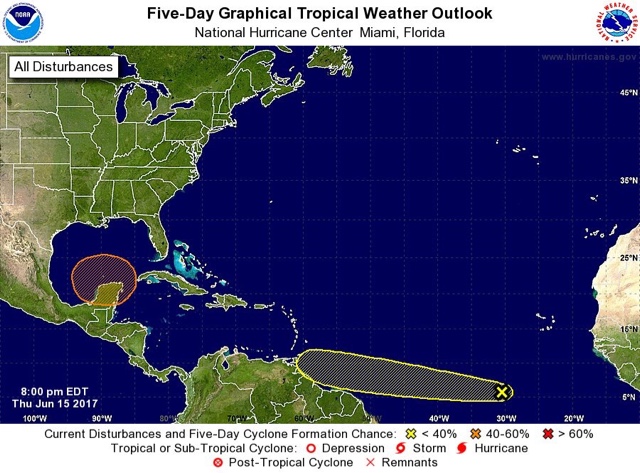 Changes for the upcoming Hurricane Season (which starts in just over 60 days):
http://www.tampabay.com/news/weather/hurricanes/national-hurricane-center-rolls-out-new-look-for-cone-of-uncertainty/2316986?
at 8:42 AM No comments: