Karen is out there in the Atlantic. Accuweather doesn't think she'll end up posing a threat to the US between the weather patterns & wind sheer. Meanwhile we're getting to the time of year that the Gulf of Mexico gets active and there's a bunch of noise going on in there (more towards Mexico) worthy of a watchful eye. We received several inches of rain Sunday from all the moisture activity in the area, but nothing of any tropical nature. Just a good lawn enhancing/outdoor activity ruining soaking.
at 7:57 PM No comments: 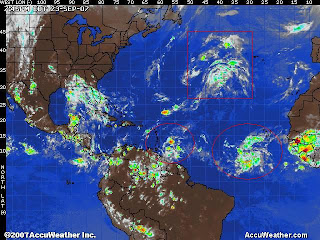 While they're talking about Subtropical storm Jerry (in the square), perhaps we should be more focused on watching the two systems in the circles that are headed west. Could be Karen & Lorenzo before the end of the month.

SUBTROPICAL DEPRESSION FORMS IN THE NORTHEASTERN GULF OF MEXICO

Humberto was the fastest developing hurricane ever, this close to land. Somewhere between 14-18 hours from nothing to a hurricane! First US landfall since 2005. How quickly we forget that last year we didn't have a single storm make land. After 2004 and 2005, it's hard to believe.

Keeping an eye on TD 8 (now Tropical Storm Ingrid) out in the Atlantic. Headed this way but the experts think it will weaken. 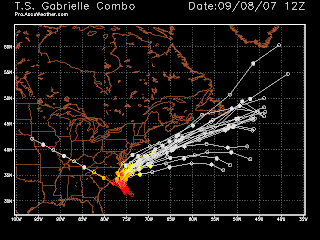 While "Sub-tropical" storm Gabrielle makes North Carolinians nervous this weekend, this is what I'm watching:

From Accuweather .... "Elsewhere in the tropics, we are monitoring a large area of thunderstorms in the southeastern Gulf of Mexico. Surface pressure over the south-central Gulf of Mexico has fallen slightly over the past 24 hours. If this trend continues we might have to consider the potential for tropical development in the central or southern Gulf of Mexico in a few days."
at 12:30 PM No comments:

Felix is the second Category 5 storm to rake the Caribbean coast this year, after Hurricane Dean — the first time two Category 5 Atlantic storms have made landfall during the same year.

And the National Hurricane Center in Miami said that Felix and another hurricane, Henriette, which simultaneously hit the southern tip of Baja California in Mexico, became the first Atlantic and Pacific hurricanes to make landfall on the same day since the center began keeping records half a century ago, The Associated Press reported.

Since reliable record keeping began in 1944, there have been 27 Category 5 hurricanes in the Atlantic. Eight of these have occurred in the past five years. That would be 30%.
at 10:33 PM No comments:

Felix prowling in the Southern Caribbean

From a disturbance to a depression to a Tropical Storm in just a couple of days. Felix should stay well south of the US and scratch the Yucatan at a Cat 1 or 2 hurricane Tuesday Night.


The storm name
"Felix" was last used in 2001 and was the first named storm post 9-11. It reached Cat 3 in the Atlantic but died out before reaching any land mass.
at 12:58 PM No comments: