Wind gusts and LOW pressure is Hurricane-like in the Northeast: 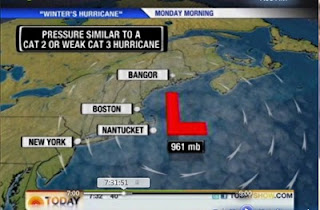 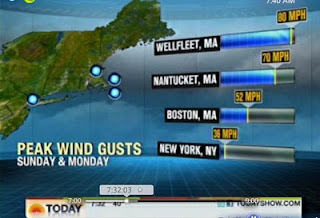 No Hurricanes in 5 Years -- but Insurance Rates Rise

Florida Insurance Commissioner Kevin McCarty says rates continue to climb because the state is still hurricane prone and non-hurricane losses have gone up 65 percent for insurance companies. McCarty says many of those losses come from sinkholes  Read the whole story here.

Email ThisBlogThis!Share to TwitterShare to FacebookShare to Pinterest
Labels: 2010, Hurricane

This one should head west but one model has it coming up into the Gulf and perhaps turning east.   We'll want to keep an eye on this one as we head into the final 40 days of the 2010 Hurricane Season.

When & if it becomes a named storm it will be Richard.

Paula grew up fast and is now deciding where to go..


However, it may turn out that Paula will be recognized as intensifying from first advisory to a hurricane which would be eighteen hours, tying 2007's Hurricane Humberto, the most recent record holder.


There have been six storms that accomplished this  feat in 24 hours.


Most models show the storm heading towards Cuba after a sideswipe of Mexico's Yucatan Peninsula.  South Florida remains on alert, especially the Keys.


Wikipedia has an entry saying this is only the 5th time we've had a storm start with the letter P.   Read more about that here.
at 9:34 PM No comments:

October is the 3rd Most Active Month of Hurricane Season

While September is traditionally the busiest month, and it was this year, October is also historically active.  Especially in the Gulf of Mexico and Caribbean.  The Weather Channel data shows October averages show 2 storms per year:

And here's where they have originated in the first 10 days of the month:

We're looking forward to getting past October.  The season ends in 60 days, so we're only 2/3 of the way through.
at 6:04 AM No comments:

The next one being watched could come up through Cuba towards Florida.

Some Florida TV station weather meteorologists are suggesting keeping an eye out on a disturbance that could become a Tropical Depression and a tropical storm late next week.

Models suggest a north or north east path up towards the peninsula.

Tropical Depression 15 could be the one for Florida to watch...

Watching local ABC affiliate last night, perennial correct Tampa Bay forecaster, Denis Phillips, says to keep an eye on this area of the Caribbean this week for possible Tropical Depression formation.  Now that Lisa has formed in the Atlantic, right now it would be TD 15.  He said that historically 95% of all Tropical storms formed in this area, travel north. 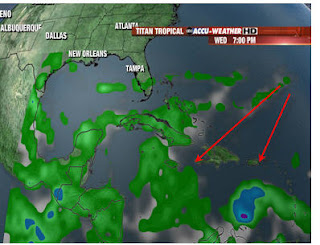 Late September and October is peak for Gulf of Mexico and Caribbean storm formation that could affect Florida.

Where are those tropical storms?

Not that I'm complaining.


Andy Johnson, meteorologist at the Fox TV affiliate in Tampa points out that there have only been 15 named storms in the entire Northern Hemisphere so far this year and it's the lowest number of tropical cyclones to date since reliable records began in 1948.


Dry air in the Atlantic seems to be the culprit coupled with the record heat wave in Russia.  Good news for now, but we are only 1/3 of the way through the season and coming into the peak of the season.  Andy says that long range models show things may pick up at the end of August

It's Hot Everywhere...including the Tropics

Image from Accuweather
at 2:42 PM No comments:

Cloudy outside my window.  A little breeze.  Expecting a rainy night here.  Praying for favorable impact to the oil spill area along the Gulf Coast as Bonnie strengthens & heads Northwest through the Gulf.
at 12:49 PM No comments: 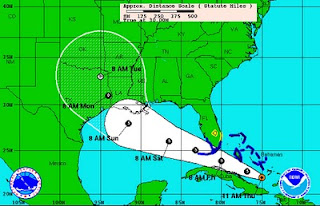 Looks like Tropical Depression #3 will evolve into a Tropical Storm later today and skirt south of Tampa Bay but unfortunately headed toward the Oil Spill in the Gulf
at 12:28 PM No comments:

Stuck in the middle! 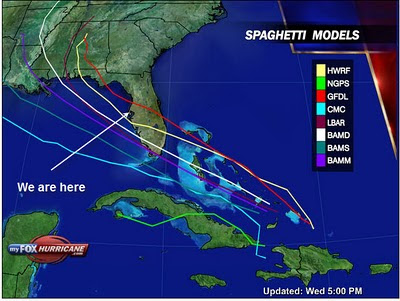 The National Hurricane Center projects that "Invest 97L" has a 60-percent chance of developing into a tropical depression in the next 48 hours.  Tampa Bay weather forecasters are saying this is probably mostly a rainmaker on Friday for us.

Should be Tropical Storm Alex by Saturday

Drs. William Gray and Philip Klotzbach have updated their 2010 Atlantic Hurricane Season forecast and unfortunately increased their numbers to be more consistent with the recently released NOAA forecast.

Their chart (above) shows an approximate 20% increase in key metrics from their April forecast.  Gray and Klotzbach release regular forecasts from the Colorado State University Department of Atmospheric Science

NOAA is predicting, with 70 percent certainty, that there will be 14-23 named storms; eight to 14 of those will become hurricanes and three to seven will be major or Category 3-plus storms.

10 Days to go - Do we even remember what a hurricane is like?

With 10 days to go until the official start of the Atlantic hurricane season, here's an article from Friday's St. Petersburg Times, that is spot on to the psyche of people I talk to locally.

On another note, the amount of press coverage on the potential mixing of weather & oil could be overwhelming for the next couple of months.  Let's just hope the season is quiet until (and if) the mess can be contained.

Meanwhile, pre-season activity has already started off the Carolina coast. Here are the details 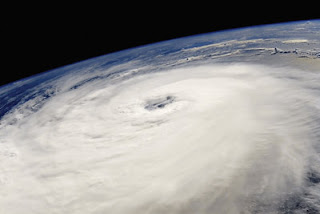 As the countdown to the start of the 2010 Hurricane Season is now less than 1 month, here's a quick webpage that shows How Hurricanes Work from the great website, "How Stuff Works"

Email ThisBlogThis!Share to TwitterShare to FacebookShare to Pinterest
Labels: Hurricane

Chance of at least one major hurricane making landfall:

United States Attorney Sally Quillian Yates said of the case, "In just a few months, this defendant claimed to be a victim of five different natural disasters in five different states. He is accused of filing over 30 fraudulent claims with FEMA, using different names, fake social security numbers, and various addresses to enable him to escape detection and steal over $30,000 in disaster relief that was intended for real victims. He has now been caught and will be called to answer for this extensive fraud."

"This investigation is an excellent example of a partnership between federal law enforcement agencies to bring down a nationwide fraud scheme. The Postal Inspection Service aggressively pursues all crimes using the U.S. Mail to further a fraudulent scheme, but is especially vigilant with regards to any scheme that attempts to profit from natural disasters such as these destructive hurricanes," said Martin D. Phanco, Inspector in Charge of the Atlanta Division, U.S. Postal Inspection Service.

According to United States Attorney Yates, the charges and other information presented in court: From September through December 2005, James allegedly filed over 30 fraudulent claims for disaster relief with FEMA, claiming to have been a victim of Hurricane Katrina in Louisiana, Hurricane Rita in Louisiana and Texas, Hurricane Wilma in Florida, severe storms and flooding in New Hampshire, and a tornado and severe storms in Indiana

The Florida Hurricane Catastrophe Fund needs $710 million to continue to pay claims still coming in from 2005's Hurricane Wilma but it is going to have to wait to assess policyholders to get those funds.

The Florida Cabinet yesterday indicated it wants more of those claims investigated to make sure they are legitimate claims before authorizing the bond and raising assessments on all policyholders to pay for them.

U.S. government will begin granting loan forgiveness to cities devastated by the 2005 hurricanes

Katrina & Rita disaster loans to be forgiven for cities that had operating deficits for three full fiscal years following the storms.

Computer and satellite technology has dramatically improved over the years and now the Hurricane Center says it will begin issuing storm watches and warnings about half a day sooner in the biggest change to its warning system in decades.

Nine of the top 10 disasters in decade were hurricanes!

They caused 255 Billion Dollars of Damage.

Good quick summary of the International Disaster Database from USAToday