Kyle formed this afternoon. Headed Due North.
at 5:52 PM No comments:

Carolinas - Keep an eye on the tropics next 48 hours

In Galveston, at least 17 structures had been leveled, officials said, 10 due to fire. The destruction included the Balinese Room a landmark former speakeasy and casino on a wooden pier extending 600 feet out into the gulf. In its 1940s heyday, the Balinese Room had seen shows by Frank Sinatra, Bob Hope and the Marx Brothers.
at 6:20 PM No comments:

Ike from the Space Station

Links to follow Hurricane Ike -- coverage from the storm... 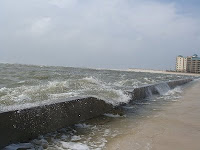 First weekly Governor Crist press conference IN WEEKS without having to start by talking about a hurricane!

Fay & Hanna soaked and swiped; Gustav and Ike came around the bend and up into the Gulf.

Our best wishes to those in the path of Ike, a Texas-sized storm! Here's an interesting history of Tropical activity in Texas

In 2001, Tropical Storm Allison — not even a hurricane — stalled out and dumped nearly 37 inches of rain on the Port of Houston over a five-day period, according to the National Weather Service. It killed 22 people and was the costliest natural disaster in Houston's history.

In 1961, massive Hurricane Carla whipped up peak winds of 175 mph. Only 46 Texas residents died, largely because about 250,000 people had evacuated.

A 1919 hurricane came ashore south of Corpus Christi as a Category 3 on Sept. 14. The death toll is estimated at between 600 and 900 people, including more than 500 lost on ten ships that sunk or were reported missing. 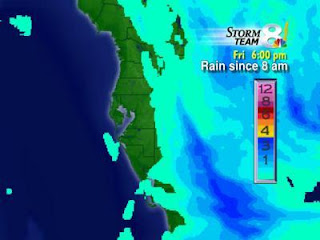 Hanna's outer band rain didn't quite make it to Tampa Bay today as was a possibility, marking the third storm this season that passed by us without much impact. We had a partly sunny day here with a nice breeze from the east. 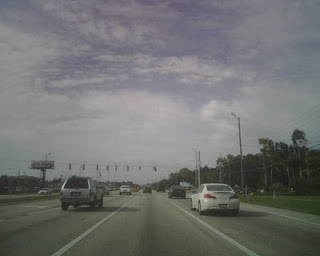 However, Ike is our focus this weekend as we watch the "cone of uncertainty" continue to evolve. The latest advisory has the center of the cone continuing to move west into the Gulf of Mexico and curling north past Florida.

I would expect that Sunday will be the day of decision based on where Ike is and the forecasts. I'm supposed to travel to Virginia & Philly Tuesday/Wednesday but I'll be making a last minute decision on Monday depending.

Just watched, who I would call Tampa Bay's most accurate tropical storm analyst, ABC Action News (WFTS -28) Chief Meteorologist Denis Phillips, predict that Hanna will brush the east coast of Florida, not be well organized, and just throw some rain at us Thursday night into Friday here on the far west coast of Florida. The east coast would get much more of the impact of storm unless the path changes dramatically.

Governor Crist has declared a state of emergency ahead of Hanna.

He says that Ike's the one to watch as it is relatively small and compact, the same way Andrew was 10 years ago when it was a week out like Ike is.

Oh yeah, then there is Josephine..... 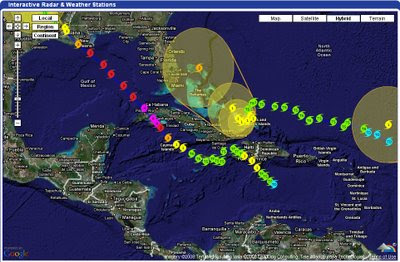 Meanwhile a beautiful day in Tampa Bay today with just enough breeze to cool and reasonably active surf that brought out the boogie boards, surfers, and sightseers. Overnight, rain subsided but rough waters in Tampa Bay caused some splashing of salt water over intercoastal sea walls on Clearwater Beach.
at 9:39 PM No comments: