Eastbound and Down.....but not Out! 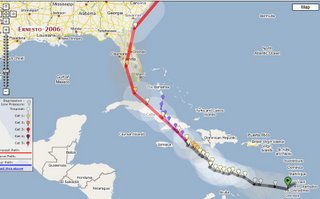 In the course of the day, the bullseye has gone from the first "R" in Clearwater to the last "R" (Click on map to enlarge).

The entire state is in the "Cone of Uncertainty" but the predicted path does appear to be shifting to the East. Possibility that the storm may try to go straight up the middle of the state.

As of 11pm, the land mass of Hispanioia (Haiti) has helped Ernesto to be downgraded to a Tropical Storm, but it's expected to strengthen overnight as it gets back out into the open warm waters of the Carribean.