Beryl forms off the Coast of the Carolinas 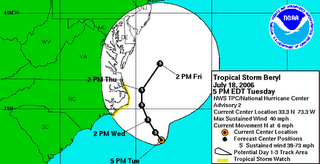 This is the fifth Beryl since coming into the storm rotation in 1982.

The storm was upgraded from a tropical depression Tuesday afternoon.

At 5 p.m. ET Tuesday, the storm was centered about 180 miles (290 kilometers) southeast of Cape Hatteras and was moving toward the north at nearly 6 mph (9 kph), the National Hurricane Center said. A slow turn toward the north-northwest was expected later Tuesday or Wednesday.
at 7:22 PM