Is it a bad sign when the network storm chasers show up in your town? 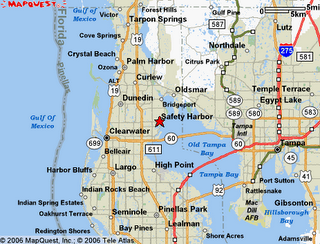 Ahead of T.S. Alberto, The Weather Channel was reporting live from our little community of Safety Harbor Sunday and tonight, NBC/MSNBC is in the exact same spot

We sit on the western edge of old Tampa Bay, which is at about 10 o'clock as you look northward at a map and see the big body of water in the middle of the Tampa-St. Petersburg DMA.

Safety Harbor is best known for its world-known Spa which attracts visitors from around the world but mostly the US Northeast.

We're about 12 miles from the Gulf of Mexico which is the direction this Storm is pushing rain and wind in from. We do, however, run the risk of a storm surge coming up Tampa Bay and pushing water into the Safety Harbor community. Our house is about 1 mile from the Bay but not in a flood zone. We also have a noticeble creek bed between us and the Bay that would absorb some surge should it make it that far.

Right now we're getting some well needed rain and occasional gusts of wind no worse than any we've seen over the past two storm seasons. The latest forecast seems to indicate we should miss the worst of it but do have the threat of tornados and flooding through tomorrow afternoon.
at 8:51 PM

Truer words have never been spoken!! Last year with Katrina they had one of their guys in Biloxi and that is when my mom decided that she had better get out. LOL Good luck this year and stay safe!