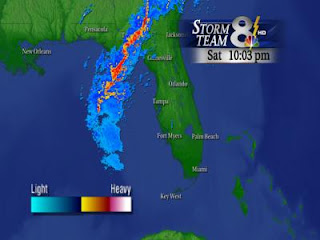 Hurricane Season officially ended over 2 weeks ago, however last night's tail end of the winter storm that crossed through the midwest and is now heading up the east coast, apparently spawned a tornado is a small portion of one of our northern suburbs in Pasco County. The tornado and the associated non-tornado winds created the most damage we've seen all year and has left up to 20,000 homes without power.

Unlike the ice storms, the power crews are working under sunny skies this morning and should have power restored today and of course, its more of TV, computer and refrigerator inconvenience than a life-threatening warmth related concern.

The rest of the Tampa Bay area was just happy to get some well needed rain (October 22nd was our last significant rain)and the cool weather that will come in today following last night's front related storm.

I didn't blog about last week's sub-tropical storm Olga that caused some damage & deaths in the Carribean, but her remnants put some moisture in the air over Tampa which brought some rain Friday night and may have helped us get some extra rain in last night's storm.
at 8:07 AM